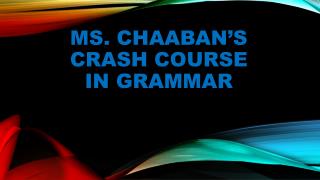 Ms. Chaaban’s crash course in grammar. You must know these punctuation rules!!!. 1 . Commas 2 . Semicolons 3. Colons 4. Dashes 5. Apostrophes. Independent clause: a complete idea in itself or in other words, one complete sentence. Teaching Grammar in Context - . presented by: hassan sulaiman abdelaziz adnani. “in the past, a traditional classroom,