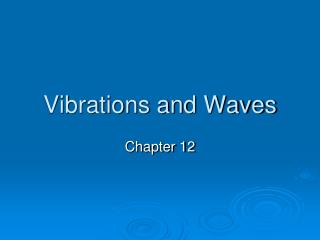 Vibrations and Waves. Chapter 12. Periodic Motion. A repeated motion is called periodic motion What are some examples of periodic motion? The motion of Earth orbiting the sun A child swinging on a swing Pendulum of a grandfather clock. Simple Harmonic Motion.

29.1 Reflection - When waves interact with matter, they can be reflected, transmitted, or a combination of both. waves

When waves interact with matter, they can be reflected, transmitted, or a combination of both. Waves that are - D can be

Chapter 14: Wave Motion - . mechanical waves. are disturbances that travel through some material or substance called