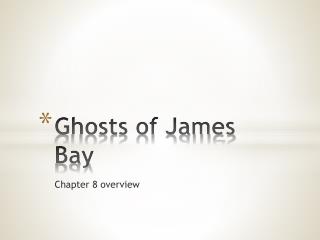 Ghosts of James Bay - . by john wilson. the surface of james bay in northern ontario was cold and calm the morning i

Ghosts: - . what they are and where to find them. what are

Ghosts! - . are they real?. can ghosts exsist ?. t.a.p.s is a group of people who hunt ghosts and paranormal activity

Ghosts of War - . by: ryan smithson also by: tom vonmaucher. what are your expectations for this book? what do you think

Ghosts of Mississippi - . as you watch the film, you should be writing down any thoughts that occur to you, or any

GHOSTS… - . do they really exist?. what do we know about them?. ghosts are supposedly disembodied spirits of the dead.

Ghosts of Olympics past - Long after the fanfare, the venues of past olympics

Ghosts of the Past: - . a look at absent characters in modern

Seven Ghosts - . by: chris knipe. the event. a tidal bore is a body of water that rushes up stream and is characterized

Gothic Ghosts - To be successful…. have a copy of the wuthering heights chapter 3 in front of you. gothic ghosts. we