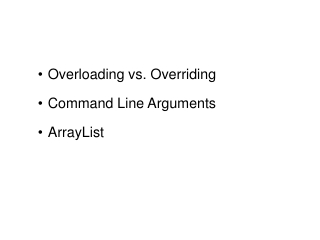 Overloading vs. Overriding Command Line Arguments ArrayList. Overriding Methods. A child class can override the definition of an inherited method in favor of its own. The new method must have the same signature as the parent's method, but can have a different body. Operator Overloading - . cs 308 – data structures. what is operator overloading?. changing the definition of an

Command Line FU - . the art of efficiency ( laziness). disclaimer. i’m not a programmer i’m doing it wrong these

OPERATOR OVERLOADING - . closely related to function overloading is - operator overloading. in c++ you can overload most

‘command-line’ arguments - . how can an assembly language program find out what the user typed on the command-line?.

What can you put into an ArrayList? - . anything that derives from object string, arraylist, counter, … int, double,

Parsing command line arguments - . assume you want a command line based version of your project: call it with different

Review: OpenGL - . command syntax. opengl commands start with a gl . this is followed by the base command such as color .