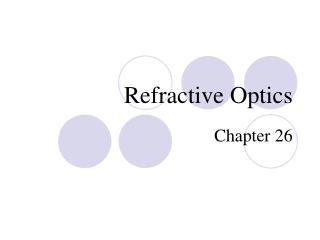 Refractive Errors - . facts. 80% of the blindness in the world is avoidable……and could be prevented or cured

Refractive Errors - . a refractive error (re) is an optical defect of the eye that prevents light from forming a sharp

Refractive surgery - . introduction. geting to know the wave. understanding the new wave. why the wave?. working with the

The Refractive Structures - . light is the material that fuels the visual system. refractive structures of the eye the

Gradient Refractive Index - . the refractive index of a particular point of in a lens with a radial gradient refractive

Refractive Lens Exchange - . how the eye works. light rays enter the eye through the clear cornea, pupil and lens. these