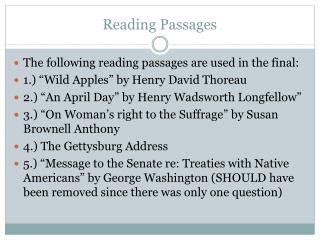 Reading Passages. The following reading passages are used in the final: 1.) “Wild Apples” by Henry David Thoreau 2.) “An April Day” by Henry Wadsworth Longfellow” 3.) “On Woman’s right to the Suffrage” by Susan Brownell Anthony 4.) The Gettysburg Address Reading the passages - . in order to get the most out of your reading: read the first paragraph last paragraph first

BILIARY PASSAGES - . objectives: 1. the student should be able to identify &amp; describe the histological features

Parallel Passages - Types of parallels:. 2. ot quotes/allusions – all nt books except philemon and 1-3 john have

Targeted Passages - . step 1: read/skim through your section again step 2: after you have completed the first reading,

Parallel Passages - Assumptions :. parallel passages. 2. god is the author. 3. the best commentary is (i) by the human

Extrarenal Passages Digital Laboratory - . it’s best to view this in slide show mode, especially for the quizzes. this