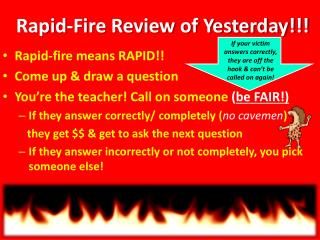 Rapid-Fire Review of Yesterday!!!. If your victim answers correctly, they are off the hook & can’t be called on again!. Rapid-fire means RAPID!! Come up & draw a question You’re the teacher! Call on someone ( be FAIR!) If they answer correctly/ completely ( no cavemen ) Flagler County Board of Education, Training Division - . rapid intervention and fire fighter safety and survival by

Review of yesterday - . mini-reports. do check the example file. name the file appropriately. give a suitable informative

8 th Grade Review - . part 2. during the 1800s, the movement of large numbers of immigrants from many different countries