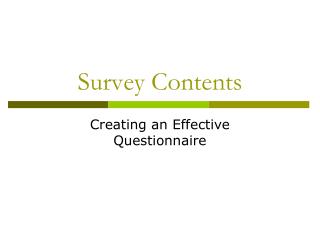 Survey Contents. Creating an Effective Questionnaire. Survey Contents. When creating a questionnaire, remember: G et it right at first—one cannot change questions in mid-survey! The goal is to measure concepts as accurately as possible (validity and reliability).

CONTENTS - . one example each regulatory issue standard-setting issue why these issues are important what is ece’s