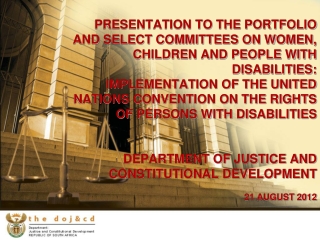 PRESENTATION TO THE PORTFOLIO AND SELECT COMMITTEES ON WOMEN, CHILDREN AND PEOPLE WITH DISABILITIES: IMPLEMENTATION OF THE UNITED NATIONS CONVENTION ON THE RIGHTS OF PERSONS WITH DISABILITIES DEPARTMENT OF JUSTICE AND CONSTITUTIONAL DEVELOPMENT 21 AUGUST 2012. Contents. Contents - Presentation to the standing committee on public accounts (scopa) on irregular, fruitless and wasteful