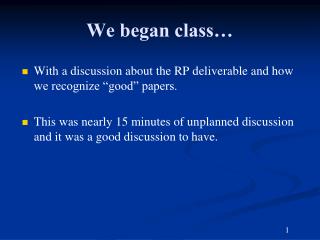 We began class…. With a discussion about the RP deliverable and how we recognize “good” papers. This was nearly 15 minutes of unplanned discussion and it was a good discussion to have. Review - What is a logic?. A formal language Syntax – what expressions are legal THE BATTLE ALREADY BEGAN - Are you ready, the war is

How Skateboarding Began - Http://www.boardshop.com.au/ http://www.skateparkguide.com/ in the event you appear back in

How Journalism Began - . highlights of the history of journalism in the united states. america’s first newspapers. did

Where we began… - Duke office of clinical research (docr) “ we don ’ t do the research – you do. we just make it

As we wait to begin class… - . please take out a sheet of paper and prepare a written reflection for sharing and

We DO HAVE CLASS NEXT WEEK - . if you miss class, you will lose attendance points 1 unexcused absence = -2.5 points