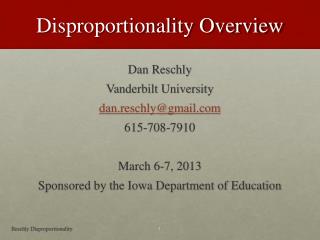 Disproportionality Overview. Dan Reschly Vanderbilt University dan.reschly@gmail.com 615-708-7910 March 6-7, 2013 Sponsored by the Iowa Department of Education. Vanderbilt Is NOT A Football Power. 25 Consecutive Losing Seasons?? But 8-4 in 2012. Vandy is #1 in Special DISPROPORTIONALITY - . vivian stith-williams, ph.d. virginia department of education. what is it and why does it

DISPROPORTIONALITY - . a review of files of american indian and black students identified with a disability in ebd in

What is Disproportionality? - Re-presenting urban landscapes of practice: artifact design to address minority