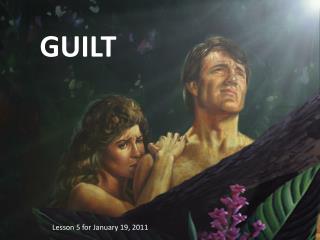 GUILT. Lesson 5 for January 19, 2011. According to a dictionary, guilt is “a feeling of responsibility or remorse for some offense, crime, wrong, etc.”. ADAM AND EVE : ORIGIN. Origin : The feeling of guilt began with the first sin . Guilt as Sin - . the trial of reverend billy and the exorcism of the sacred cash register -tony perucci. tony perucci.

Guilt and Redemption - . miguel, samantha, joel. thesis. in “the kite runner, guilt and the pursuit of redemption are

Forgive My Guilt - Poetry writing lesson. forgive my guilt. your chromebook lids, that is. close your lids

Guilt-Free Family Caregiving - We want to make the best care choices for our loved ones. the most informed and right

Rejection Depression Loneliness Guilt - . the healer of my. t he power of being forgiven. psalm 32 (around page 380 or

Guilt-Free Agile Development - Plan-driven or agile–why choose when you can have the benefits of both? john manzo

Protecting Yourself from Carried Guilt - Having experienced this very thing today, i would like to share some ways to