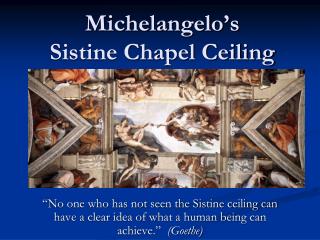 Michelangelo’s Sistine Chapel Ceiling. “No one who has not seen the Sistine ceiling can have a clear idea of what a human being can achieve.” (Goethe). The Sistine Chapel La Capella Sistina. EXTERIOR Chapel decoration was started by Pope Sixtus in 1473 Not What We Went Looking For - . arlene m. davis, jd. ethical, legal, and social issues in identification of sex

IT Legislation &amp; Regulation - . cs5493. information has become a valued asset for commerce and governments. …