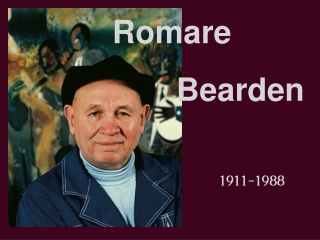 Romare Bearden. 1911-1988. Born in Charlotte NC in 1911, grew up in Harlem in New York. Graduated from NYE with degree in education, took many art courses. Interests include music, performing arts, history, literature, and global art. Bearden grew up during the Harlem Renaissance Pro-democracy movement in Burma, 1988-90 - . ( schwedagon pagoda in background). discussion questions. in burma, what

Romare Bearden (1911-1988) - . bearden was always concerned with the underlying geometry of his

ROMARE BEARDEN The Master of Collage 1911-1988 Charlotte, NC - . collage- a piece of art made by sticking various

To what extent was Sun Yat-sen responsible for the 1911 Revolution? - . l/o – to evaluate the claim that sun yat