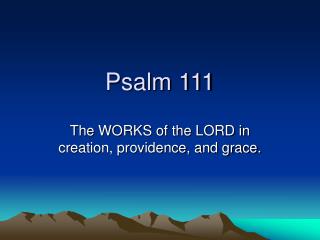 Psalm 111. The WORKS of the LORD in creation, providence, and grace. Psalm 111 from Treasury of David , by Charles Spurgeon. A Different Look at Psalm 23 This an eye opener; probably we never thought nor looked at this Psalm in this way, even

Psalm 92 - . how to create an appropriate. make the thank you about them not you (v. 1). it is good to give thanks to the

Psalm 22 - . an illustrative lesson from life science. psalm 22 . no other psalm describes the crucifixion of christ in

Psalm 119 - . the joy of god’s word. psalm 119. the longest chapter in the bible. is devoted entirely to professing the

STRESSBUSTERS &amp; ANTIDOTES FROM PSALM 23 - . t he seven greatest sources of stress. they are all found in psalm

The Psalms: the titles may - . identify the psalm with a person or group give historical information about the psalm give

His Love Endures Forever by Chris Tomlin - . give thanks to the lord our god and king his love endures forever for he is

Our Spirit- Psalm 51 - . theme passage: isaiah 40 31 “but those who wait on the lord shall renew their strength; they

Psalm 100 - . 1 shout for joy to the lord, all the earth. 2 worship the lord with gladness; come before him with joyful

Psalm 111:1-3 - . i will give thanks to the lord with my whole heart, in the company of the upright, in the congregation.