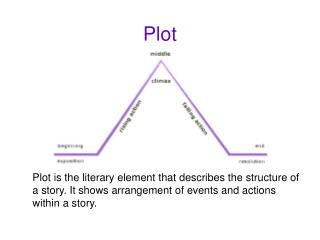 Plot. Plot is the literary element that describes the structure of a story. It shows arrangement of events and actions within a story. Plot Components. PLOT - . exposition – overature &amp; beginning of act i: betty parris is in a “coma” after the girls were

Plot - . elements plot. 1.title/author/genre/ point of view. the author writes the story but is not in the story genre is

Plot - . there were 5 mice getting ready for the winter season 4 of them gathered food while frederick “gathered” sun

PLOT - . the plot has three main parts. setting. the plot so far…. orientation: we meet lockie and his family.

Plot - . walsh publishing co. 2009. plot. plot - the events that take place in a story. every story needs a plot! the

Plot - . plot is what happens and how it happens in a narrative, or story. sample video (creepy pixar). diagram of plot.

Plot - . plot is the sequence of events that make up a story. every plot is made up of a series of incidents that are

Plot - . black cat. conflict. the conflict in the story would be man vs. himself. and man vs. man. because he gets to be

Plot - The plot is the events that happen in a story . sofia,juan c amilo and f elipe. plot. ¨ f or example ¨leo the

plot - Part three, fahrenheit 451 barry 2010. plot. the plot is the action or sequence of events in a novel, short

Plot - . a series of events, or structure, of the story. answers the question, “what happens?” always involves some

Plot - Name:. “flowers for algernon”. date:. directions: label the plot and subplots. then, just like a layer cake,

Plot - . how to analyze the events in a story. plot is defined as “ the series of events that make up the story .”. a

Plot - . plot is the literary element that describes the structure of a story. it shows arrangement of events and actions

PLOT - Climax the highest point of interest; the solution to the conflict is revealed. falling action the events that