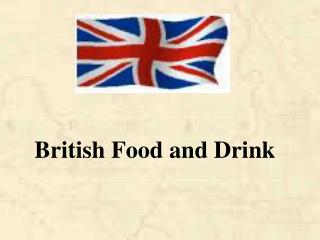 Food and Drink - . food and drink – vocabulary can you put these sentences into the right order?. 1. i for usually

Italian food and drink - . focaccia. focaccia is an flat oven-baked italian bread made with olive oil.

FOOD AND DRINK - . by: i kadek sumiarta 3168 producted@2012 english department faculty of teacher training and education

Food and drink - . robinsons. drink and food will be there e.g. b urgers. orange juice. sandwiches. activity's. the

FOOD AND DRINK - Unit 6. food and drink. lesson b grammar focus. grammar : modal verbs: ‘will’, ‘would’ and

U3 Food and Drink - . 回浦中学 汤谢红. vocabulary. pronunciation. talk about the food and drink. spelling spot.

Tudor Food and Drink - . by morwenna and

Food Drink - Are you crazy for the food and drink and looking for the all latest racipy online? contact us; here you get

All About Britain (Primary One) - . where is britain?. britain. scotland. england. wales. the british flag. weather in

British and Russian cuisine - . in britain people used to have a traditional english breakfast, which consists of