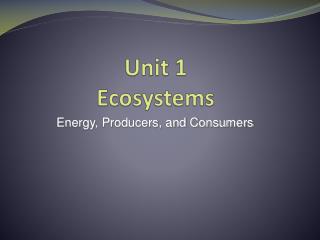 Unit 1 Ecosystems. Energy , Producers, and Consumers. Primary Producers. What are primary producers? Primary producers are the first producers of energy-rich compounds that are later used by other organisms. Organisms need energy for growth, reproduction, and metabolic processes. UNIT 1 SUSTAINING ECOSYSTEMS - Sustainable systems. one that survives and functions over time in human termsone that

Ecosystems Unit - Key learning: all living and nonliving things on our planet are connected. unit essential question: how

Ecosystems unit - . today’s big ideas: how species interact with each other (community ecology) how matter and

A.S. Module 1: Unit 2 - Ecosystems - . 2(a) the ecosystem as an open system involving the transfer of energy and

Unit 12: Ecosystems - . copy the vocabulary words and definitions to page 41. ecosystem. a system consisting of all of

Unit 6: Ecosystems - . an ecosystem is… . all the living and nonliving things that interact in a particular environment

Unit 3: Ecosystems - . what is an ecosystem?. ecosystem : the network of relationships formed among plants, animals, and

ECOSYSTEMS - 1 - . climate zones - areas of the earth where certain climate conditions have existed over time

Ecology Unit Topic 1: Relationships in Ecosystems - . the study of ecology. ecology = the study of how organisms interact