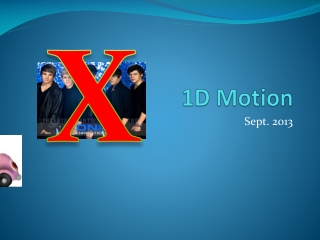 Motion in 1D - . from the simpsons. imbalance of forces. we have talked a lot about forces being balanced. when forces

CH 2: 1D motion - . when we discuss motion what are we talking about?. translation – motion from one point to another

Vertical 1D Motion Problem - . bellwork!!. on the moon. a moon rock on the moon is thrown upward with velocity of 7 m/s.

Vocabulary Quiz- (1D Motion) Wednesday - . vector vs scalar. most of the quantities used to describe motion can be