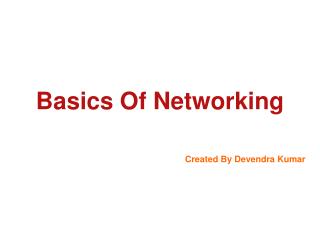 Basics Of Networking. Created By Devendra Kumar. What is a Computer Network?. A network is a collection of computers, printers, routers, switches, and other devices that are able to communicate with each other over some transmission media. Types of Networks. Design and Implementation of Smartphone-based Systems and Networking - . dong xuan department of computer science and

Wireless Networking Tutorial - . janie mohajerin and alton wilson. start. instructions. to move to the next part of the