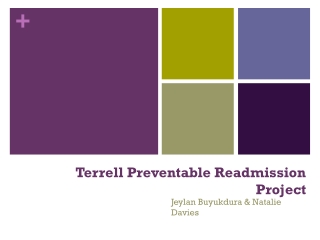 Readmission - As a mechanism of general return management process history, statistics and practices, forms of

Terrell Owens - . by: esmeralda, amanda, and abigail. as a baby!. terrell eldorado owens was born on december 7, 1973 in

Readmission problems - . by asger møller. future me. hospital. had not seen his physician. early follow up is important.

BY MATT TERRELL - Media studies homework. by matt terrell. the masthead. the masthead is the magazine name at the top of

NoCVA Readmission Collaborative - . october 25, 2012. session objectives. share and discuss what you learned from

Potentially Preventable Readmissions - . who gets the “credit” for a preventable readmission. the hospital that is