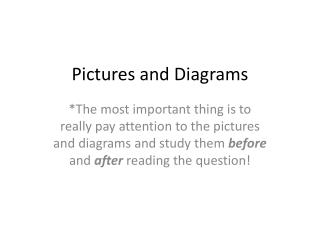 Pictures and Diagrams. *The most important thing is to really pay attention to the pictures and diagrams and study them before and after reading the question!. The map below shows weather conditions in North America for one day in October. Pictures, Pictures - . what are the

How can we use diagrams, pictures and drama to represent energy transfers? - . observe the following action: pushing an

Pictures and Words - . when should we use a visual display? what is a visual language? dual coding theory? how to

Words and Pictures - A simple observational

Pictures and Explanations - . by: cheyenne pace and sarah clark. river dwellers in bangladesh. this picture is a good

PICTURES - Long times ago in martinsburg was a small town, in 1970 the railroad pass through a city and the factories

Pictures - . by: gabby mcnally. the buses they took to go place and what they held up. some of the people that were in