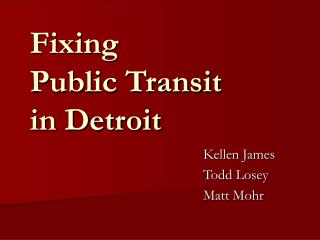 Detroit Public Schools FY 2011 Budget - . creating centers of excellence at every school, every day, for every child in

City of Phoenix Public Transit Department - . phoenix – it’s hot…. but not enough to fry an egg on the sidewalk.

Mass Transit and Public Infrastructure - . white pathways are too deep for hyrail deployment and will require an