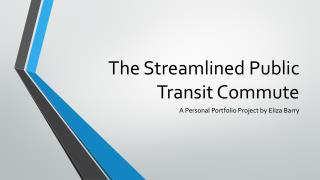 Public Transit Accidents - Description: public transportation helps millions of people get to where they need to be every

Reinventing the Commute - . how employers are greening the trip to work. “smart commute makes smart sense! “the

Streamlined LCA - . streamlining the lca process. full lca is only practical with no limitations to time, expense, data

Mass Transit and Public Infrastructure - . white pathways are too deep for hyrail deployment and will require an