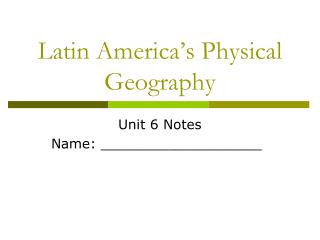 The Physical Geography of Europe - . chapter 11. seas, peninsulas, and islands. 300 miles of coastline dikes and polders.

Distant but close: The Impact of Immigrant Remittances on Latin America - . manuel orozco, inter-american dialogue may 30

Regional Geography - . what is a region?. a region is an area that has certain characteristics that set it apart and make

GEO 200: Physical Geography - . terrestrial biota (1 of 2). geographical questions. what is the range of a species or

Economic Democracy in Latin America and the United States - . dada maheshvarananda www.priven.org. 1. my story. “at the

The Geography of the United States - . us geography basics. third largest country in the world. half the size of russia.