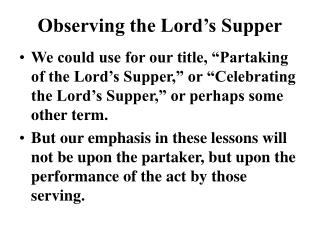 Observing the Lord’s Supper - . we could use for our title, “partaking of the lord’s supper,” or “celebrating

The Lord s Church Versus Denominationalism - A denominational church. was built by man away from truthwas built after the

Observing the Lord s Supper - The lord's supper is a ritual, in that it is a sequence of events that the lord gave

Observations Regarding The lord s Supper - Background. we are products of our environmentbeliefs/knowledge are passed on

The Last Supper - . echo mime. sitting at the table. jesus bent down. to offer his service. and washed his disciples’

The Last Supper - . watch the movie. 1. subtitle “passover” &amp; write down key words that summarise what the

THE LORD’S SUPPER - . what is it?. redefined passover [celebrates a new redemption] communion - koinonia = fellowship

The Lord’s Supper - . luke 22:14-20. the lord’s supper. memorials have always been a part of human life and existence

Maundy Thursday and the Lord ’ s Supper - . lesson 29. when did the institution (establishment) of the lord ’ s