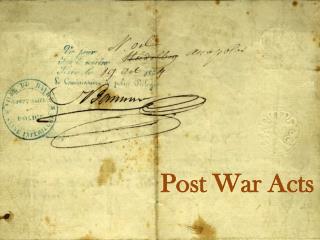 Post War Acts. The Royal Proclamation Act of 1763. Worried about British control of their land, soon after the French and Indian War ended, the Ottawa, Delaware, Shawnee, and Seneca Tribes joined forces and began to fight the Colonists

Post War Problems - . swbat: understand the differences/similarities and advantages/disadvantages of capitalism and

Post-War Europe - . march 14-17, 2014 objective: students will draw conclusions about the end of world war ii and the

Post-war Culture - . art and literature after the war. the lost generation:. the people of the 1920’s who rejected

Post-War Kansas - . chapter 6, section 1. post-war boom. after wwii, people were ready to get back to normal life women

Post War Review - . wwi ended in 1918 the us now back to i solationism- policy of pulling away form involvement in world

Post-War America - . chapter 36. essential question. how did the events of wwii help facilitate the onset of the cold war

Post-War America - . return to nativism. what is nativism ? why might nativism return to prominence after world war i?.