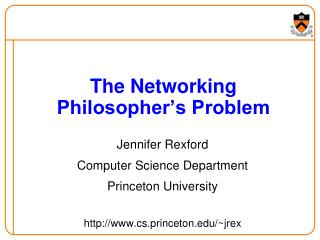 The Networking Philosopher’s Problem. Jennifer Rexford Computer Science Department Princeton University http://www.cs.princeton.edu/~jrex. The Internet: An Exciting Time. One of the most influential inventions A research experiment that escaped from the lab The Existence of Matter - . the problem of perception and the external world. bertrand russell. whoever wishes to become

Networking in the Connected Age - . stuart moss – s.moss@leedsmet.ac.uk. for every desktop computer, there are 10

The Problem of Evil - The epicurean paradox why does god allow evil? why doesn’t he remove it? . the problem of evil.

Enhancing Your Networking Skills - . contents. the importance of networking why we choose not to network types of

Approximate Networking - . h. t. kung harvard university panel 1 on “ what are the biggest opportunities in networking

Effective Networking - . agenda - -. what is networking? introversion vs. shyness getting started do’s and don’t’s

Approximate Networking - . h. t. kung harvard university panel 1 on “ what are the biggest opportunities in networking