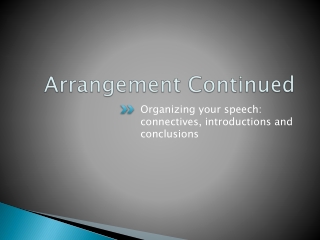 Arrangement Continued. Organizing your speech: connectives, introductions and conclusions. Practice Recognizing Patterns of Organization. 1. I. The first area in the recycling plant is the collection room. II. Beyond the collection room we come to the sorting area. The Language of Composition Arrangement - . pages 13-14. arrangement. m ore than one way important for the development of

The subspace arrangement is = w here are linear subspaces of . - Relation between solvability of some multivariate

Functional Groups Continued - . table r. ethers :. ethers continued :. look at both sides of the – o – if the same,