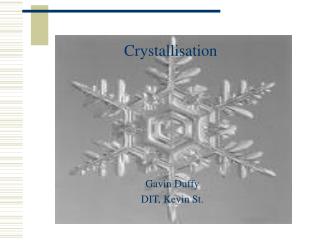 Crystallisation. Gavin Duffy DIT, Kevin St. Learning Outcomes. After this lecture you should be able to….. Describe crystal growth and nucleation Define the constituents of a solution and degrees of saturation Describe the solubility curve Water of Crystallisation - . some compounds have water associated with them. eg . cobalt chloride cocl 2 in crystal form

Crystallisation from melts - . why do crystals form? what controls their shape and size? three aspects to the growth of a

Order of crystallisation &amp; enclaves - . it has long been common to work out the sequence in which the minerals in

Water of crystallisation of barium chloride

FREEZE CRYSTALLISATION Based on an Environmentally Friendly Technology By - Frederick simon oosthuizen. treating of

Experiences with the use of the Microbatch Under Oil Method of Crystallisation - . nafeesa noordeen &amp; sandra