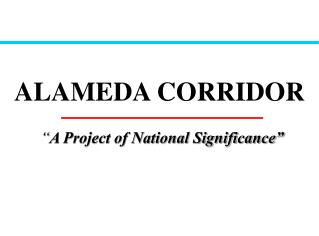 ALAMEDA CORRIDOR. “ A Project of National Significance”. Project Purpose. The Alameda Corridor Project is needed to keep pace with the steady growth of cargo moving through the Ports of Los Angeles and Long Beach. U.S./Pacific Rim trade has doubled during the last decade Planning For Healthy Cities - . collaborating to create and preserve community health through partnerships with planners