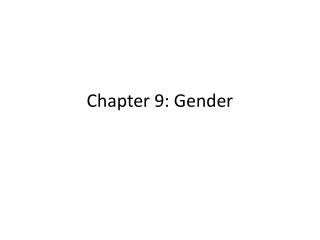 Chapter 9: Gender. What Makes Men and Women Different?. Is it something biologically determined, or is it the result of social and cultural processes? The term sex was taken to refer to the biological characteristics associated with maleness and femaleness. Sex Vs Gender - . what decides who you are?. conception. if sex is whether an individual is male or female, then this is

Chapter 11 - . gender stratification. sex and gender. sex the physical and biological differences between men and