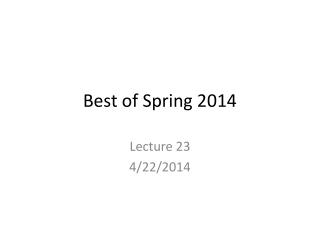 Best of Spring 2014. Lecture 23 4/22/2014. The Evolution of Programming. As complexity continues to grow… … developing a program as recipe-like sequence of instructions becomes increasingly difficult. Spring 2014 - Spring was welcomed in the northern hemisphere this week after a long, cold winter for many. the

Spring 2014 - . mrs. ramsey. what to expect…. what is the difference between weather and climate? what causes storms?