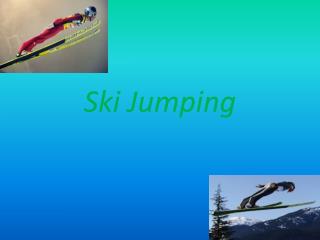 Ski Jumping. 1st time at the O lympics. Ski jumping has been a part of the Sochi 2014 Olympic Games since the very first Winter Olympic Games, in Chamonix in 1924. During the 1964 Winter Games in Innsbruck the large hill competition was introduced to the Games for the first time. Jumping Spider - . by.justin r watts. is it dangerons to humans. jumping spiders are known for their curiosity. where it

Jumping Elastic - . set up: two students hold a loop of elastic around their spread legs.

Jumping rubber - . iveta vrabcová. game is for at least 3 players played outside on the sidewalk and the game is very

“Jumping Hurdles” - . jumping your hurdles. one two buckle up my shoe three four i know there's more to life

Base JUMPING - . netanel and shon. base jumping. base jumping is an activity where participants jump from some objects