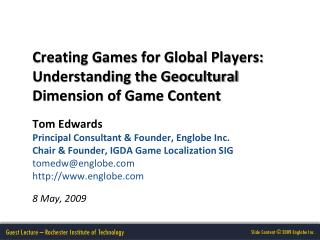 Game Megatrends - . (largely from pascal luban in gamasutra ). the necessity of increasing the commercial life span of

Unit I : Trends in the Game Market - . gad. game mods. mods are where player s develop content. for example, the very

Forgotten games - . e-twinning iveta vrabcová. chess. chess is a table game it is a game for up to two players it is

Education Games - . simple games specifically designed for the schools such as the bbc learning website. simulation and

If you like video games, - . try these books. user unfriendly by vivian vande velde arvin rizalli, his mother and six of

Game Theory - . topic 3 sequential games. “it is true that life must be understood backward, but … it must be lived