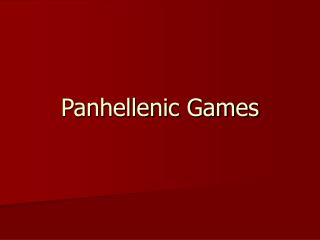 National Panhellenic Conference - . officially formed in 1988, but greek life women had been gathering as early as 1891

Junior Panhellenic Council - . 2014. what is junior panhel ?. a small group of freshmen from different panhellenic

Building Panhellenic Spirit - . what every collegiate woman needs to know about the national panhellenic conference

Reaching your Panhellenic Potential How to be a Successful Panhellenic President - . npc- who are we?. npc is a

So you’re interested in Panhellenic Exec? - . who are we?. pan=all hellenic=greek we represent all sorority women on

Panhellenic Education The NPC UNANIMOUS AGREEMENTS - . central to the national panhellenic conference are its unanimous

Games - May 19, 2010. games. why games?. sixty-eight percent of american heads of households play computer and video