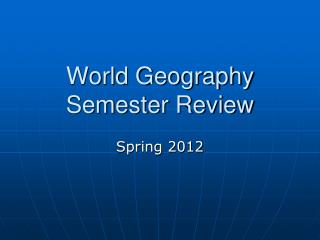 Why is Geography Important? - It is an essential intellectual building block for understanding world affairs. now more

LAW STUDIES - . semester exam review. what is the formal term for the study of law and legal philosophy ? . judicial

Accounting I Semester Exam Review - . an entry level job performing one or two accounting tasks is called a(n). a.