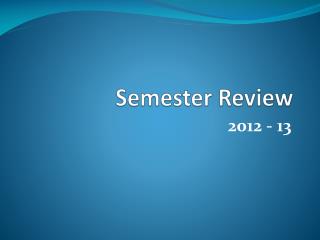 Semester Review - . tecm 3200 dr. lam. principles of web design. writing for the web how it differs from other types of

Semester Review - . german settlers clashed with other texans over the issue of a. empressario contracts. b. land prices.

Semester Review - . booker t. washington believed that the best way for blacks to improve their status in the united

Semester Review - . what are the 3 subatomic particles that make up an atom?. protons neutrons electrons. protons-

Semester Exam Review - Elements of fiction: the things that are present in fictional stories. 1. characters: the persons