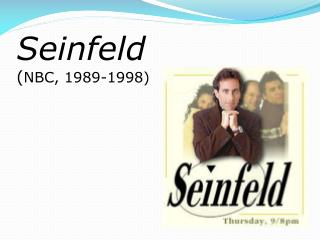 Seinfeld ( NBC, 1989-1998). Comedy. “Life is a comedy to those who think, a tragedy to those who feel.”—Horace Walpoole (18 th Century) Comedy as a tale that ends happily. Comedy as a means for producing laughter. The ambiguous nature of comedy (comedy as enantiodromia). A comparison of two cars I would like to own: a 1989 Bat mobile and a 2012 Lamborghini Aventador - . presented by: alec

The Seinfeld Principle for Advertising - . by steve mckee business week , march 8, 2007 presented by: lisa hill and

Divine Comedy - . the characters are dante , virgil, and beatrice on the surface the poem describes dante's travels

Which is the best stand up comedy shows in bangalore - Since various years back, dr. jagdish chaturvedi has co-composed