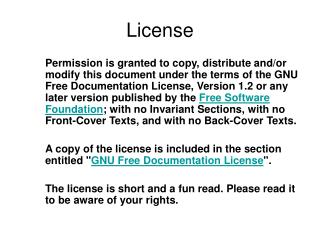 License. Permission is granted to copy, distribute and/or modify this document under the terms of the GNU Free Documentation License, Version 1.2 or any later version published by the Free Software Foundation ; with no Invariant Sections, with no Front-Cover Texts, and with no Back-Cover Texts. Content License - Are your teachers tired of all the copies and is your district spending too much money on paper? try

Cryptocurrency License - With the increasing demand for digital currencies, getting a cryptocurrency license has also

LICENSE LAW - The fined, the suspended. and the revoked. license law. today’s topics. the auditor dropped in. meet an