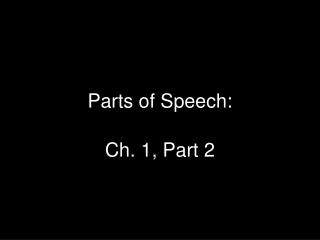 Parts of Speech:. Ch. 1, Part 2. What is an adjective?. An adjective is a describing, or modifying, word Describes a noun Tells us: what kind, which one, how many, or how much Example: I like the blue shirt. The adjective is blue because it tells us what kind of shirt Practice Speech Recognition - . definition. speech recognition is the process of converting an acoustic signal, captured by a

Parts of Speech - . a review. i. the parts of speech. nouns: names a person, place, thing, or idea verbs: shows action or

Parts of Speech - . a review. i. the parts of speech. nouns: names a person, place, thing, or idea verbs: shows action or

Clear and present danger (test) - . a legal interpretation that reconciled two views of the first amendment right of free

Laryngeal Function and Speech Production - . learning objectives. describe the basic role of the larynx in speech and

Parts of Speech - Grammar review. parts of speech. why learn grammar? . people are often judged on their speaking and

Part of Speech Tagging - . september 9, 2005. part of speech. each word belongs to a word class. the word class of a word