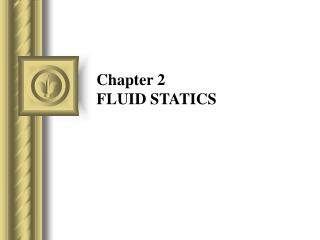 Chapter 2 FLUID STATICS. 2.1 PRESSURE AT A POINT. Average pressure: dividing the normal force pushing against a plane area by the area. Pressure at a point: the limit of the ratio of normal force to area as the area approaches zero size at the point. Chapter 2 Pressure and Fluid Statics - . introduction. many fluid problems do not involve motion. they concern the

Chapter 11 Fluid Statics - . fluids are materials that can flow: gases and liquids. air is the most common gas, and moves

Fluid Statics - . why do your ears hurt when you dive deep into a pool, and how can steel float on water?. fluid statics: