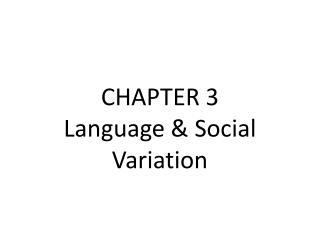 CHAPTER 3 Language & Social Variation. “ Burridge (2004) quotation / ‘using the proper language of the time’ / the ‘slang’ of the time. Not everyone in a single geographical area speaks in the same way in every situation . Also education and economic status affect speech in different ways. LANGUAGE VARIATION - . speech communities. basic definition:. a group of people steadily in communication with one

Language in Social Context - . by: julie wethy. phenomenon. language varies according to the social community language

Language in its social setting - . by betz lund. language is a social phenomenon. language expresses solidarity or group

Variation - . chapter 9. evolution is a two-step process. variation arises among individuals the proportions of variant

Linguistic Variation: Speech Communities - . the totality of messages we exchange with one another while speaking a given