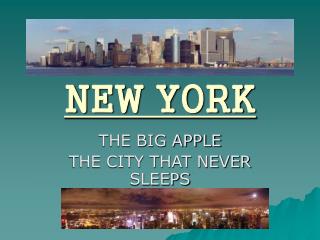 NEW YORK. THE BIG APPLE THE CITY THAT NEVER SLEEPS. The Big Apple. The name „Big Apple“ symbolizes the success. It has ever been used, first by writers and then my Jazz musician. The five districts/ boroughs. ● (1) Manhattan ● (2) Brooklyn, ● (3) Queens, ● (4) The Bronx,