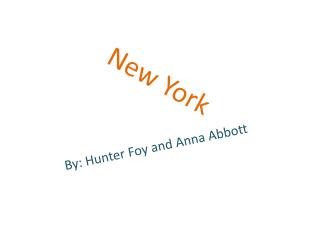 New York. By: Hunter Foy and Anna Abbott. Information on New York. The Colony founder: Duke of York How the founder ended up owning the land: He was giving the land because he was the king’s brother. What the founder wanted the land for: To break it in half and give it to two friends.