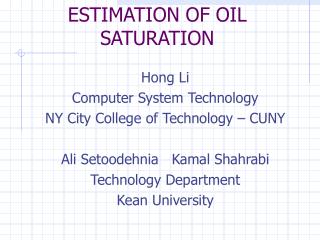 Saturation - . roi levy. motivation. to show the deference between linear and non linear spectroscopy to understand

Saturation - . what is saturation?. what is the difference?. saturation is when as much solid material as possible has

Saturation effect of MPPC - . introduction. mppc output signal saturates because of its limited number of pixels.

Salt Saturation Test - . background . proteins which are collide in nature are kept in solution by two factors electric

MPPC Saturation Corection - . idea -&gt; how to do. mppc gain measurement . to apply saturation correction to the

Saturation and Unsaturation - . a saturated compound has the maximum number of hydrogen atoms alkanes are saturated