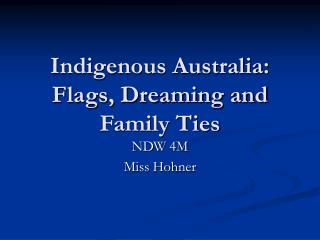 Indigenous Australia: Flags, Dreaming and Family Ties. NDW 4M Miss Hohner. The Aboriginal Flag. The flag is divided horizontally into equal halves of black and red, with a yellow circle in the centre. Civil and Family Law Needs of Indigenous People in NSW - . the family and civil law needs of aboriginal people in new

Australia - . this is our project on australia. we have worked very hard so we hope you enjoy our presentation.

The Australian Aborigines - . oral / primal religions among indigenous tribes. the concept of dreaming: the creation

Dreams and dreaming - . dreams basics. we all dream, at least if we are healthy, though some never remember and even they

TRIP TO SIX FLAGS for the xc team!!!! - . by: angel childress. expenses and income!. about six flags!. in geargia! fun