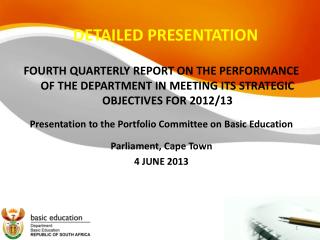 FOURTH QUARTERLY REPORT ON THE PERFORMANCE OF THE DEPARTMENT IN MEETING ITS STRATEGIC OBJECTIVES FOR 2012/13 Presentation to the Portfolio Committee on Basic Education Parliament, Cape Town 4 JUNE 2013. DETAILED PRESENTATION. Presentation Outline. PART A Detailed Reading - . unit1. difficult sentences. as he looks, he sees a strange expression come over the face of the