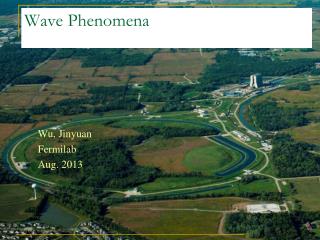 Wave Phenomena. Wu, Jinyuan Fermilab Aug. 2013. Introduction. We will talk about classical physics only. We will try to show phenomena not commonly seen in text book. Many pictures in this file are taken via www.google.com They are used for review and comments only. Wave Phenomena - . diffraction of light off a compact disc. interference pattern of water waves. constructive and

WAVE PHENOMENA - . wave reflection  waves bounce off objects and reflect back the direction they came. with sound waves,

A: Wave Phenomena - . a.6 polarisation. polarisation when a charged particle loses energy, a tiny disturbance or ripple

Waves and Wave Phenomena - . physics 12 source: giancoli chapter 11. objectives. waves. what are some examples of waves

Topic 11 – Wave Phenomena - . standing/stationary waves. interference of waves. remember that when two waves of the