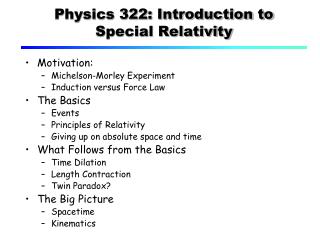 2.1 The Need for Ether 2.2 The Michelson-Morley Experiment 2.3 Einstein’s Postulates - Chapter 2 special theory of

Relativity Theory by Hajnal Andréka , István &amp; Péter Németi - A logic based foundation and analysis of.

As an object approaches the speed of light, its momentum increases dramatically. - According to special relativity, mass

Introduction to Particle Physics - . dr. flera rizatdinova. high energy group at the osu. we have both theoretical and